The U.S. Patent Office has just awarded Sportaflex a patent for our revolutionary spring-based safety design. U.S. Patent No. 11,371,258

Sportaflex is a modular, portable, lightweight fencing system designed for athletic and recreational playing fields as baseball fences and softball fences, ski areas, or crowd control. Our long-lasting fencing in two sizes consists of individual aluminum alloy frames with vinyl mesh attached and a patented safety feature to reduce the risk of injury upon collision. This sports fence system is easy to install and meets all relevant ASTM standards. Contact us for your home run fence and portable baseball fence needs. 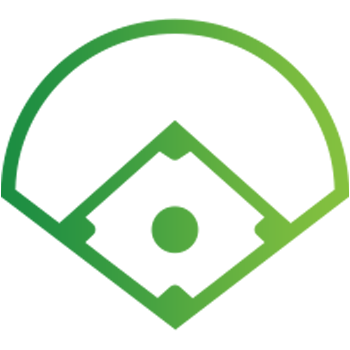 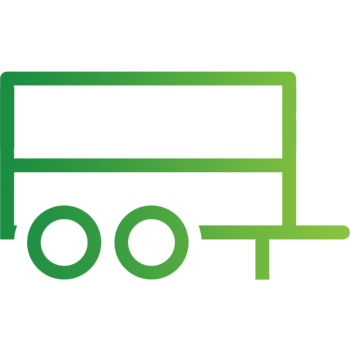 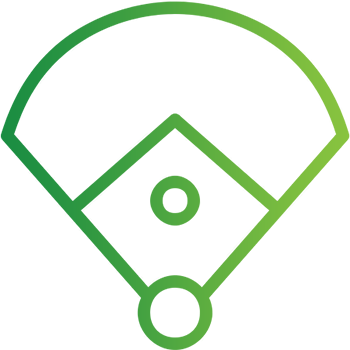 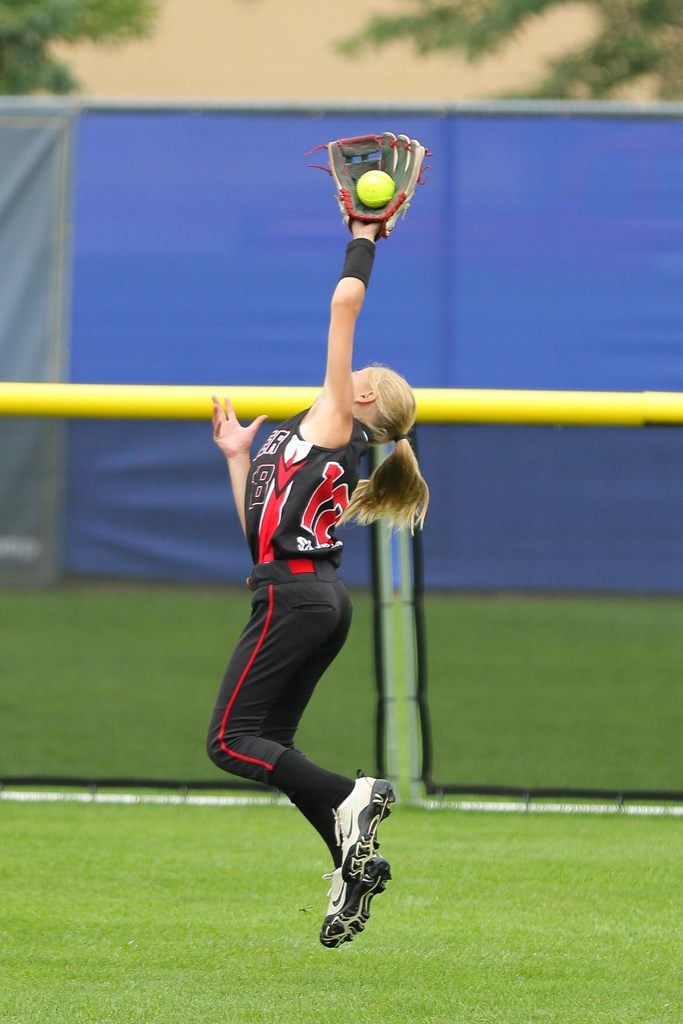 Sportaflex is a modular, portable, lightweight fencing system designed for use on athletic and recreational playing fields including a baseball fence and softball fence. 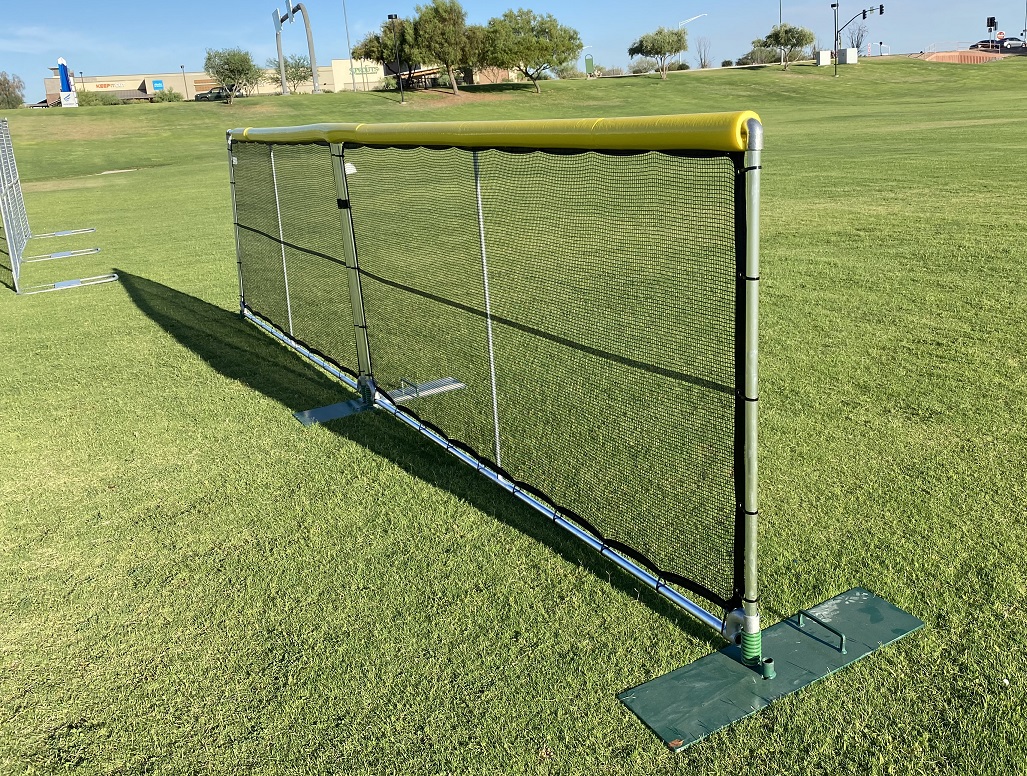 Our SPORTAFLEX FastFold is designed for the budget-conscious buyer who wants our Premier Fence look, but without all the frills. 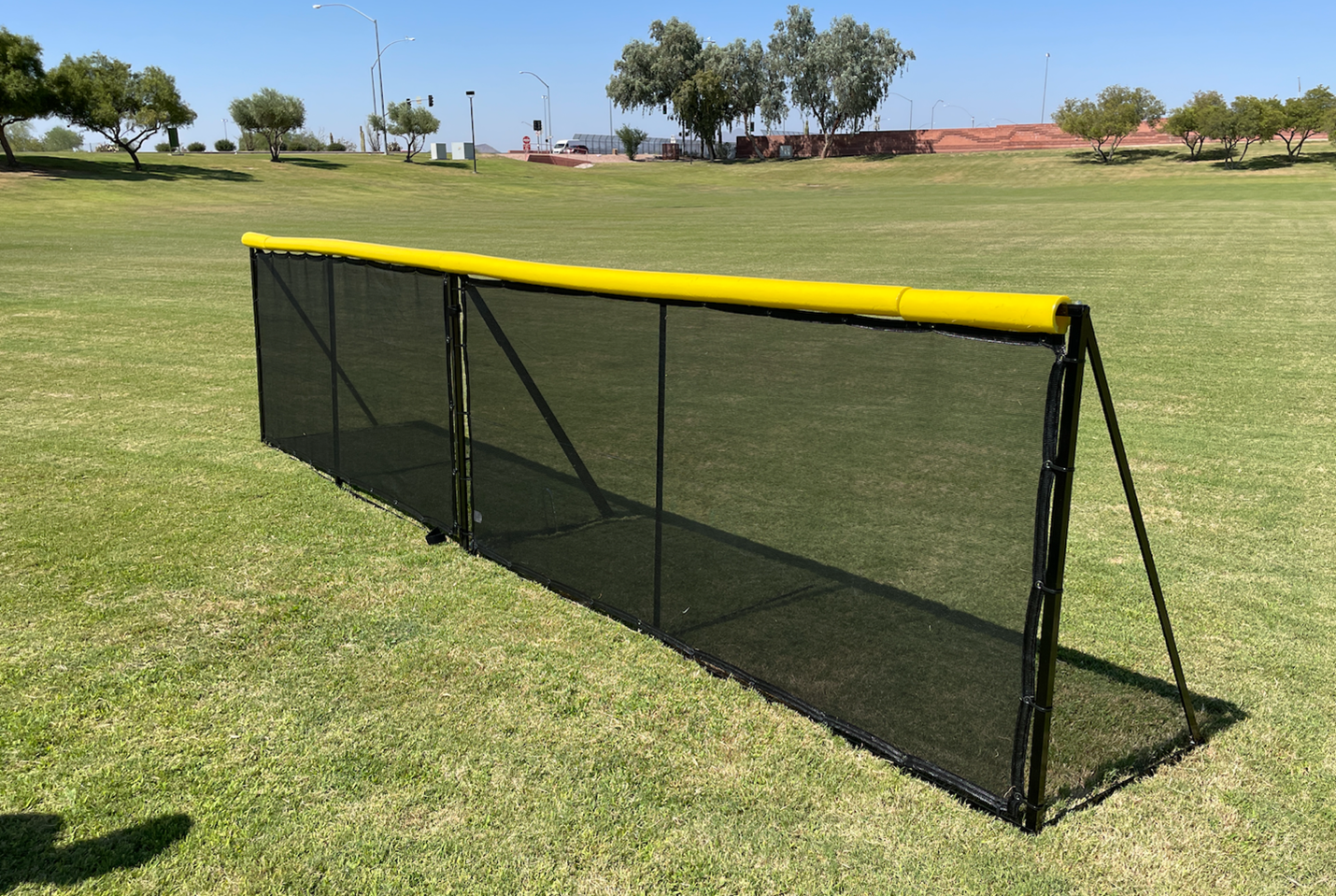 Never replace another plastic pole! The all-new Sportaflex Spring-pole system combines a steel spring with a strong aluminum pole for maximum strength for your portable baseball fence and softball fence. 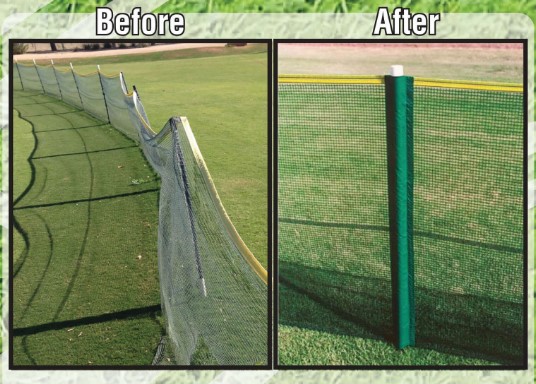 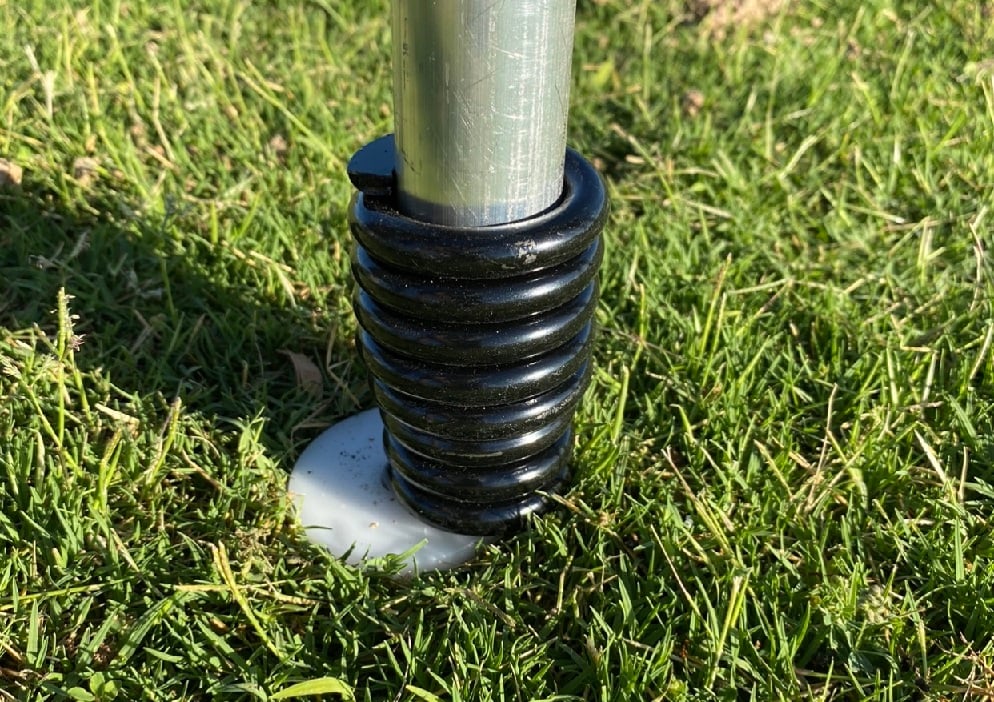 Our Sportaflex Field Transport Trailer makes it easy to get your baseball fence or softball fence from storage to the field. Store your ground mounts inside the front storage box and keep your sports fence ready to roll to any field. 5 ‘ x 8’ and holds up to 2,000 lbs. 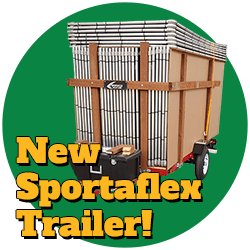 Post anchor is available with a spring option, which is designed to reduce the risk of injury. Upon impact, it is designed to absorb the blow from a collision, then right itself to its original position. 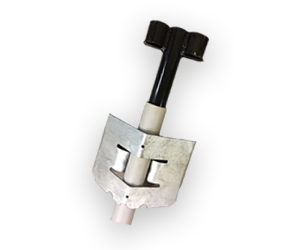 For venues that utilize artificial turf, our steel base-plates offer an alternative to drilling through expensive turf. These baseplates are also excellent for crowd control. 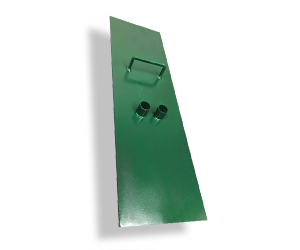 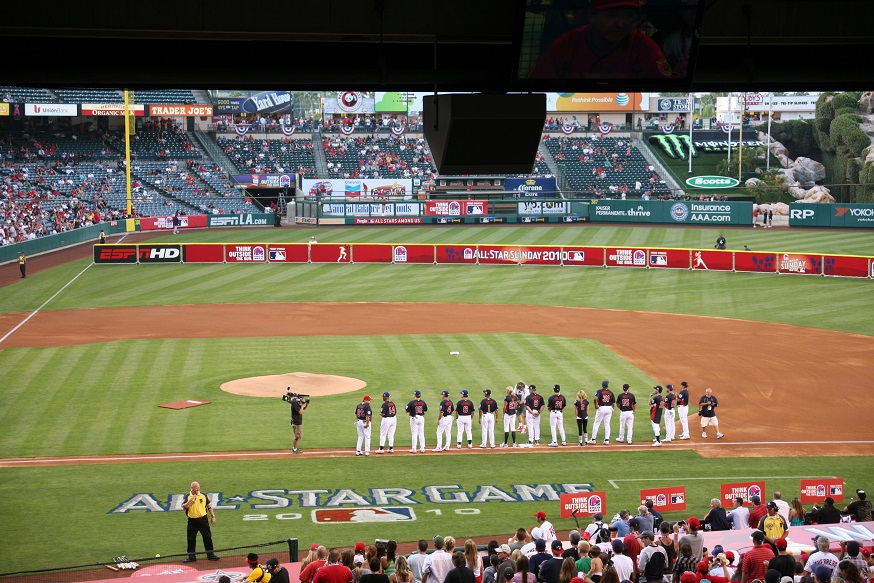 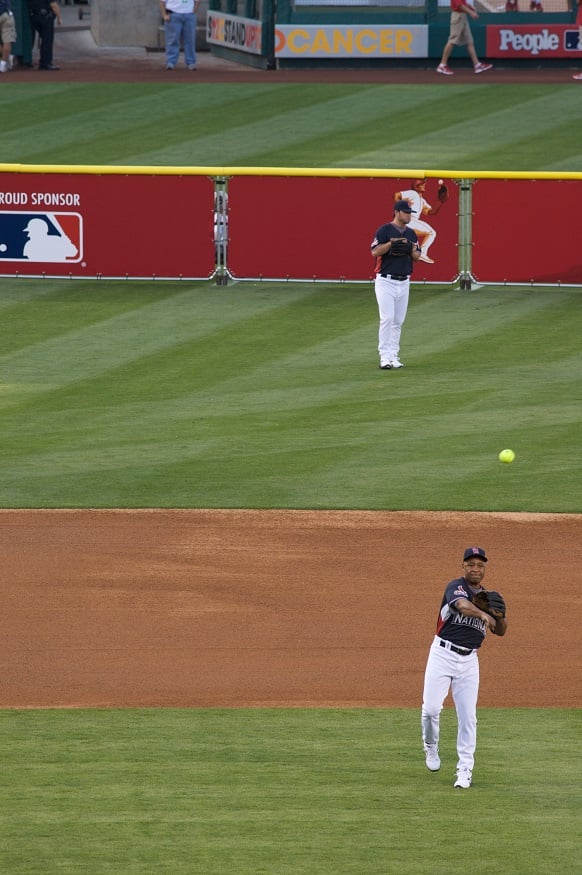 …Wanted to thank you both again for all of your effort in providing Northeastern  Athletics with your company’s fencing. It was an absolute hit this fall and garnered a ton of positive feedback from our players and fans.

…We have had great feedback on our baseball homerun fence and now we are looking to purchasing one for our softball field.

…No doubt THIS is the way to go. We were replacing numerous poles with the “old” version (non-spring), with the spring pole upgrade we have saved a significant amount of time and money.

…they are working out great and everyone really likes them.

Why are Americans so obsessed with baseball?

Baseball is flawless in every manner; there are no defects in the game. Everything fits together well, from the field to the Baseball fence. It’s designed around God’s favorite shape, a diamond, and the remainder is covered in the most amazing grass on the earth. Nothing beats sitting at your favorite stadium on a hot, bright day, with a hot dog slathered in all the fixings in one hand and an ice cold beer in the other. This scenario is representative of American culture.

It has seen several modifications, from the dead ball period to the expansion era to the long ball age. However, the sport has always been and will continue to be popular. Football has been around for at least 60, maybe 70 years. What about baseball? It’s 1839, 172 years later, and it’s more popular than ever. Don’t misunderstand me. Football is my favorite sport, and I believe it is a fantastic sport. But there’s something special about baseball that will always make it America’s sport, America’s pastime. Here are a few of the reasons why baseball is so popular in the United States:

Baseball does not have a clock

The absence of a clock is one of the things that drives Americans insane about baseball. There is no clock notifying the players, coaches, or supporters when the game will conclude. That distinguishes it from soccer, where the final whistle is blown after 90 minutes. Baseball differs from football in that there is no timer. Professional games take two and a half of 30 minutes each.

Its advocates feel that the absence of a clock increases the competitiveness of baseball. Both teams understand that no matter how far ahead they are in terms of scoring in the early phases of the game,hitting past the Baseball fence, they cannot ‘time-waste-their-way-to-victory.’ Regardless, both sides must play 27 innings. Regardless of how long it takes. Whether their players are as young as a cucumber or as elderly as a horse.

And what if the game is still tied after 27 outs? Both sides will have three more outs to secure a win. What if they’re still entwined? There are three more outs. And what if they’re still bound together!? Three more strikeouts. Both sides will play until one of them has more runs and both have expanded their outs. This persuades players on both teams to give it their all every time out. Otherwise, they’d be forced to play till the wee hours of the morning.

The score system is excellent

Baseball’s scoring system differs from those of other sports. Consider soccer, where there is no guarantee of a win. You may miss a goal if you go to the toilet or take a bottle of beer. Aside from some goals, which team wins is determined early. Baseball, on the other hand, has an excellent scoring system that ranges from 0 to 1. Each match, a team scores 9/10 runs, and each run is critical to the team’s success. This scoring format is popular with Americans.

Coming back from a low score is a very crucial and pleasurable thing to do. As previously stated, each side scores an average of 9/10 runs every game. So covering up a few runs is a significant problem, even if 3/4 isn’t a difficult feat. And some come back with 7/8 runs to elevate the contest to a new level. When the beloved team comes back and continues to score and clear the Baseball fence, the joy of American fans knows no bounds. As a result, this is a fantastic kind of entertainment, and the Americans are enamored with this fascinating game.

An immigrant who is absolutely unfamiliar with America may learn to play baseball and feel an instant kinship to tens of millions of other Americans. Baseball has also played a significant part in the history of the United States. When Jackie Robinson made his debut for the Brooklyn Dodgers, it acted as a surrogate for the Civil Rights Movement. Millions of repressed African Americans thought, “If Jackie Robinson was able to break down the racial barrier in baseball, maybe I can break down the racial barrier in my own life.”

When one learns about baseball’s long history in America, the idea that the Phillies’ parade had a massive crowd appears less far-fetched. Indeed, it appears to make great sense. With the impact that professional sports (such as baseball) have had on American history, culture, and way of life, it’s no surprise that we Americans have grown to adore them. America and professional sports were a perfect combination.

Beginnings: The precise birth of the contemporary sport of baseball is difficult to trace. For centuries games using a ball were played; in the United States, where baseball started, the game is said to be a hybrid of Rounders and Cricket, two of the games that the European migrants brought over. Of course, there is the common notion that  a Civil War Union soldier named Abner Doubleday, “developed” or “made” the contemporary game, although no evidence of this has been provided, and Doubleday personally never took credit for developing the sport.

Though written regulations for “Baseball” may be discovered as long back as the1800 in Philadelphia, New York Knicks Baseball team birthed the guidelines that resemble the sport to this day , a team of roughly 30 young men that played the sport on a regular basis. They set regulations that are still in use today, including the diamond-shaped pitch, making the “balk” illegal, instituting foul lines, a hitter strikes 3 times and his out, and requiring runners to be thrown out or tagged. The Knickerbockers and the New York Base Ball Club played using these rules on the 19 of June 1846 in Hoboken, NJ the first official game (with the Knicks losing 23-1).

Baseball was initially referred to as “the National Pastime” in the New York Mercury newspaper in 1856, however the moniker was a little premature at the time. Baseball began as a New York sport predominantly played by immigrants at the time. Newcomers to the US flocked to the sport in droves, creating their own teams while the Knicks refined the game.

The game’s popularity grew largely after the American Civil War. Cricket was more difficult to play throughout the war because it required beautifully cut grounds. Baseball, meanwhile, is a sport that can be played practically anyplace. Furthermore, while most clubs were owned by middle-class merchants, the middle 1800 saw the development of working-class clubs, which became the most favoured among the game’s followers, the majority of which themselves working-class individuals.

Cincinnati Red Stockings are the first professional team in the United States.

The Cincinnati Red Stockings, backed by a consortium of Ohio shareholders, were the country’s first “all-professional” baseball club in 1869. Each member was given a wage, with shortstop George Wright earning $1,400 per season – a figure equivalent to about $23,000 presently. However, the team’s management relocated it to Boston in 1870. The newly created Boston Red Stockings joined eight other clubs from Chicago, Philadelphia, New York, Washington, Troy (New York), Fort Wayne (Indiana), Cleveland, and Rockford (Illinois) to create the National Association of Professional Ball Players a year later.