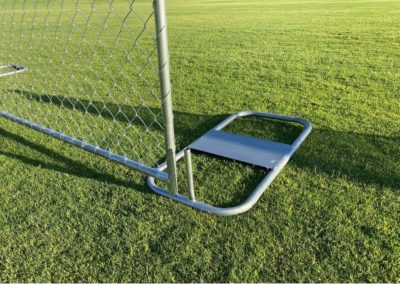 To receive a quote, please complete your details in the form below

We supply connectors with each panel to secure panels together.  Given proper care in transporting and storage, our Portable Chain Link Fence Panels will supply your field with many years of service. We also provide printed advertising or logo banners, to brand your field.

Minimum purchase of 6 panels.  Weight: 75 lbs. Call or email sales@sportaflex.com for volume pricing and freight charges to your field.

There are no reviews yet.

Only logged in customers who have purchased this product may leave a review.

Why is Baseball so popular in the United States?

Baseball is flawless in every manner; there are no defects in the game. Everything is in perfect harmony. It’s designed around God’s favorite shape, a diamond, removable fence panel, and the remainder is covered with the world’s most magnificent grass. Nothing beats sitting at your favorite stadium on a hot, bright day, with a hot dog slathered in all the fixings in one hand and an ice cold drink in the other, watching your favorite team play. This scene represents American culture.

From the dead ball period through the expansion era to the long ball age, it has seen a lot of changes. However, the sport has always been and will continue to be popular. Football has been around for at least 60 years, if not more. Are you a baseball fan? It’s been 172 years since 1839, and it’s still as popular as ever. Don’t get me wrong: I think it’s great. Football is one of my favorite sports, and I believe it is a fantastic sport. However, there is something special about baseball that will always make it America’s sport and pastime. Here are a few reasons why baseball is so popular in the United States:

Baseball does not have a timer

The absence of a clock is one of the things that drives Americans wild about baseball. The players, coaches, and supporters have no way of knowing when the game will conclude because there is no ticking timer. That distinguishes it from soccer, which ends after 90 minutes when the referee blows the final whistle. Baseball is further distinguished from football by the absence of a timer, as professional games are split into two halves of 30 minutes each.

The absence of a clock, according to advocates, makes baseball more competitive. Both teams are aware that they cannot ‘time-waste-their-way-to-victory’ regardless of how far ahead they are in terms of scoring in the early phases of the game. Regardless of the circumstances, both sides must play 27 outs. Whatever it takes, no matter how long it takes. Regardless of whether their players are as young as a cucumber or as elderly as a horse.

And what if the game is still tied after 27 innings? To pull out a win, both sides will earn three more outs. What if they’re still entangled? There are three more outs. What if they’re still entangled!? Three more strikeouts. When both teams’ outs are extended, both teams will continue to play until one of them has more runs. This persuades players on both teams to give it their all every time they go onto the field. Otherwise, they’d be forced to play till the wee hours of the morning.

The grading system is fantastic

Baseball has a unique scoring system compared to other sports. Consider the sport of soccer, where the outcome is never definite. You may miss a goal if you need to go to the restroom or get a bottle of beer. Aside from some goals, the winning team is determined early. Baseball, on the other hand, has a fantastic 0 to 1 scoring system. Each match, on average, a team scores 9/10 runs, and every run is crucial to the team’s success. This scoring format is popular with Americans.

You can always comeback

Coming back from a low score is a very crucial and pleasurable thing to do. As previously stated, each side scores around 9/10 runs a game. So covering a few runs is a significant problem, even though 3/4 isn’t a difficult effort. Some, on the other hand, come back with 7/8 runs and elevate the contest to a new level. The joy of American fans knows no bounds when their beloved team comes back and continues to score. As a result, this is a fantastic kind of entertainment, even the portable chain link fence panels won’t interrupt the fans and the Americans are enthralled by this thrilling game.

An immigrant who is absolutely unfamiliar with America can learn to play baseball and feel a profound connection to tens of millions of other Americans all of a sudden. Baseball has also had a significant impact on American history. When Jackie Robinson debuted for the Brooklyn Dodgers, it acted as a surrogate for the Civil Rights Movement. Millions of downtrodden African Americans thought to themselves, “If Jackie Robinson can break down racial barriers in baseball, maybe I can break down racial barriers in my own life.”

When you hear about baseball’s long history in America, the idea that the Phillies’ parade drew a huge crowd appears less improbable. In fact, it appears to be very reasonable. With the influence that professional sports (such as baseball) have had on American history, culture, and way of life, it’s no surprise that we Americans have grown to adore them. Professional sports and America were a match made in heaven.

Roots: It’s impossible to pinpoint the actual origins of baseball as a modern sport. Ball games were played for centuries; in the US, where baseball started, the game is said to have evolved from a mixture of rounders and cricket, two European-influenced sports. Of fact, there is a common story which states Doubleday, a Civil War Union soldier, “developed” or “made” the current game, although no proof of this is available, and Doubleday personally never took credit for the game.

Set of rules for the New York Knicks Baseball Club

Though written regulations for “baseball” may be discovered as long back as 1800 in Philadelphia, the NY Knicks BaseBall Team, a set of around 30 young men that frequently played the sport, came up with the first set of regulations that resemble the game today. The diamond-shaped pitch, rendering the “balk” illegal, establishing foul lines, batter is out after 3 strikes, and requiring runners to be thrown out or tagged are among the regulations they developed (which are still in use today). Knickerbockers and the New York BaseBall Club played the first formal game under these regulations on 19-Jun-1846 in Hoboken, NJ (with the Knicks losing 23-1).

Baseball was initially referred to as “the National Pastime” in the NY Mercury newspaper in 1856, however the moniker was a little premature at the time. At the time, baseball was predominantly a NY Sport played by immigrants. While the Knickerbockers worked to develop the game, newcomers to the US took to it by the scores, creating their own clubs.

The game gained popularity especially post the American Civil War. Cricket was more difficult to play through the war because it required beautifully cut grounds. Baseball, meanwhile, is a sport that can be played just about anyplace. Furthermore, while the majority of clubs were owned by middle-class merchants, the middle 1800 witnessed the development of working-class clubs, which became the most favoured amid the game’s followers, the majority of whom were themselves working-class individuals.

The Cincinnati Red Stockings were the first professional team in the United States.

The Cincinnati Red Stockings, backed by a consortium of Ohio investors, were the country’s first “all-professional” baseball club in 1869. Each player was paid a wage, with shortstop George Wright getting $1,400 each season, which equates to over $23,000 per year now. The team’s management, however, relocated it to Boston in 1870. The National Association of Professional Ball Players was founded a year later by the newly created Boston Red Stockings, together with eight additional clubs from Chicago, Philadelphia, New York, Washington, Troy (New York), Fort Wayne (Indiana), Cleveland, and Rockford (Illinois).

Reach out to us to find out more about how our portable home run fence options can turn your field into a baseball or softball field.